As explained above, wide-ranging intervention by the government in the market continued until the early 1990s. In many cases, the entry and exit of businesses was decided not by market forces but by the government. In the meantime, the Korean economy grew steadily in size and depth. In manufacturing, for example, the real value of shipments increased 5.5 times in two decades between 1975 and 1995 and the number of firms 4.2 times. Market competition increased accordingly.

An important contribution to enhanced market competition was made by the Monopoly Regulation and Fair Trade Act (MRFTA), which was legislated in 1980 and became effective in 1981. MRFTA banned or restricted the abuse of market-dominant positions, anti-competitive M&As, undue collaborative activities, unfair business practices, restraints on competition by trade associations, resale price maintenances, and anti-competitive international contracts. MRFTA underwent several revisions afterwards and came to incorporate regulations on the chaebol, going beyond the traditional role of a competition law.1) The organization in charge of competition policy also underwent changes. The Fair Trade Commission (FTC) was instituted in 1981 within the EPB, and was then separated from the EPB and became an independent agency in 1994. The Chairman of the Commission was accorded a minister-level position in the government in 1996.

Despite many achievements, MRFTA faced basic constraints in carrying out its mission of competition promotion. Competition policy was foreign to many policymakers and did not command wide support from the public. The strong tradition of state dominance over the market led many to question whether free and fair competition would help promote industrial development. The government continued to intervene extensively in the market in the 1980s and 1990s by setting up entry barriers, initiating industrial rationalization, keeping a large number of state-owned enterprises (SOEs) under its control, and regulating prices. Anti-competitive government regulations were common not only in manufacturing but also in the service sector and the SOE sector. Very slow progress in deregulation and privatization severely limited the role of competition policy (Seong Min Yoo, 1997a).

Deregulation began to emerge as an important priority in the late 1980s. In 1988, the new administration designated ten industries－alcoholic beverages, refineries and others－ as targets for deregulation and sought to promote competition in these industries. Another eight industries－shipping, bus passenger transport and others－were added in the following year. The FTC drew up deregulation plans in consultation with the private sector and relevant ministries. In 1990, the Administrative Deregulation Committee was organized within the Prime Minister’s Office to spearhead the government-wide deregulation efforts as part of the Comprehensive Economic Vitalization Program. These efforts were inherited and expanded by the Kim Young-sam administration that came into office in 1993.

The main goal of regulatory reform, however, changed quickly as the economy dipped into a downturn in 1989 after heady growth in 1986-1988. Rather than a step toward acompetitive market structure, deregulation was now proposed as away to free businesses from red tape and thereby stimulate their investment. One example was the Comprehensive Economic Vitalization Program of 1990 mentioned above.

This change in tenor created considerable confusion and distorted the reform process (Seong Min Yoo, 1997b). Concerning economic, social and administrative regulations, the deregulation effort was often focused only on administrative regulations, although economic regulations tended to pose a greater threat to competition. Regulatory reform shoud encompass not only deregulation (abolishing unnecessary and harmful regulations), but also better regulation (improving the cost-effectiveness of necessary regulations). But the latter was dropped from the equation in Korea. Regulatory reform is market-friendly, but not necessarily business-friendly, because it makes life more difficult for incumbent firms by exposing them to greater competition. But talk about “business-friendly deregulation” had the potential to lead policymakers to anti-competitive deregulation.

Privatization, another prerequisite for an effective competition policy, was not pursued with consistency either. Privatization in Korea dates back to the 1950s when Japanese properties were sold to the public. Later, SOEs in aviation, surface transportation, mining and manufacturing were privatized in 1968 and banks and refineries were privatized in the early 1980s. In 1987, an ambitious plan was announced to privatize large-scale SOEs such as Korea Telecom Corporation, Korea Electrical Power Corporation and Pohang Steel and Iron Corporation. The privatization, however, ended up only a partial success. Many worried that a large supply of new share issues would overburden the stock market and that economic power would be further concentrated in the chaebol if the latter were to buy the SOEs. Managers and workers of SOEs also fiercely opposed privatization. In 1993, the Kim Young-sam administration announced yet another ground-breaking plan to sell all government shares in 58 SOEs out of 133 existing ones, but the implementation encountered the same objections and fell far short of the original plan.

While competition policy was struggling to take root, regulations on the chaebol multiplied. Attempts to halt economic concentration in the chaebol began in 1974 with the introduction of a credit control system, which was not vigorously enforced and soon neglected. In 1980, another set of regulations was announced, but again the implementation was discontinued after a year. It was in 1987 that the chaebol policy got a fresh start. The cross-shareholding regulation was put in place in the revised MRFTA, and the so-called basket control of credit2)  was strengthened. Thereafter, these regulations constituted two of the most important chaebol regulations, but the government also employed other regulations on cross-debt guarantees, intra-group transactions, business diversification, and ownership structure. Such a vast array of regulations, however, failed to stop the concentration of economic power. The share of the largest 100 companies in mining and manufacturing remained at 40-45 percent in terms of shipments and around 20 percent in terms of employment in 1980-1990 with no noticeable signs of decline (Figure 2-14).

This is not surprising given the opportunities facing the chaebol at the time. The government provided an implicit state guarantee to the chaebol’s expansion based on the “too-big-to-fail” principle. In fact, the larger a chaebol was, the more it was likely to be saved by the government from bankruptcy. Low interest rates also encouraged borrowing by the chaebol to finance their expansion. The domestic market was too small for the chaebol to realize economies of scale through specialization, and diversification into various business lines was a natural choice for them. Insufficient foreign competition due to import restrictions assured the success of such diversification. Various chaebol regulations addressed the symptoms rather than the root causes of the chaebol problem, and were bound to fail (Sung Soon Lee and Seong Min Yoo, 1995, p.414)


Figure 2-14. Share of the largest 100 companies in mining and manufacturing 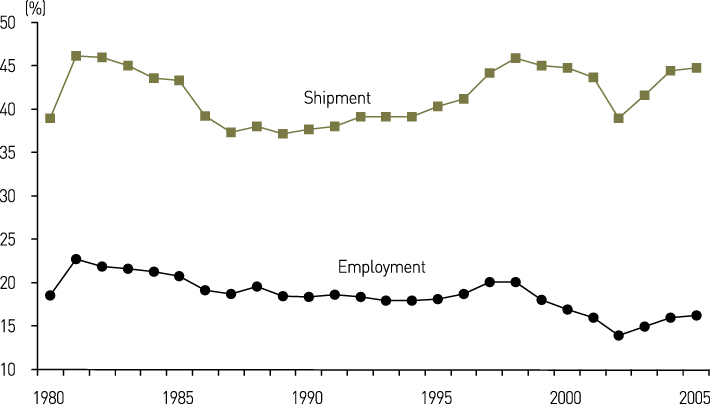 In the meantime, the chaebol increased their influence in the political as well as economic arena. After Korea achieved a peaceful transition from autocracy to democracy in 1988, the chaebol gradually broke away from state control. They became more vocal and did not hesitate to criticize the government when necessary.

Given these changes, the government had two alternative choices (Seong Min Yoo, 1997a, p.34). The first was to stop providing implicit state guarantees and accelerate the transition to a free market economy in which competition and the threat of bankruptcy would discipline the chaebol , and the second was to introduce various ad hoc regulations on their behavior. The government chose the second option and failed to tame the chaebol.

The basic solution rested in dismantling the government-business risk partnershp, reinforcing competition policy, liberalizing interest rates, and opening domestic markets to foreign producers. Most of these reforms were launched in earnest only after the 1997 crisis.

1) Initially, MRFTA stipulated the necessity of preventing excessive concentration of economic power without defining specific policy measures. Then the regulation on cross-shareholding was introduced in the first revision in 1986 and that on cross-debt guarantee in the third revision in 1992. The ceiling on cross-shareholding was lowered in the fourth revision in 1994.
2) The basket control was applied to the largest 50 chaebol, and intended to monitor and regulate the total flow of credits from each bank into each chaebol and its subsidiaries.