The government increased intervention in domestic financial markets to support the government-led growth strategy, reversing the course from the 1950s (Pyung-joo Kim, 1995, p.199; Seok-mo Koo, 1986, p.127). First, commercial banks were renationalized. The government promptly enacted the Act to Dispose of Illegally Accumulated Wealth in July 1961 and confiscated bank shares in October. The government was now in full command of commercial as well as specialized banks.

The government also strengthened its grip on the central bank by revising the Bank of Korea Act in May 1962. The Financial and Monetary Board was renamed as the Financial and Monetary Operation Board to emphasize the operational, in contrast to policy-making, role of the Board. The Minister for Finance was given the right to request the Board to reconsider its decisions. When the Board stuck to an initial decision by a super-majority (over two-thirds of the votes), the final decision was to be made by the cabinet. Thus the ultimate responsibility for monetary policy came to rest clearly with the government. The BOK was also subject to inspections by the Ministry of Finance and to audits by the Board of Audit and Inspection, and the decision on the BOK’s annual budget was transferred from the Board to the government.

The Banking Act was revised twice, in May 1962 and January 1969, to reinforce government control of banks. The control was often exercised through notices and instructions from the Ministry of Finance without any clear legal basis, and affected all areas of management. At the same time, the BOK also exercised control on commercial banks through its rediscount facility on which banks depended heavily.

This array of apparatus enabled the government to intervene in the market quite extensively. The only incident where the government retreated from market intervention was the decision to raise interest rates in 1965 following the recommendation by American advisers－Hugh Patrick, Edward Shaw and John Gurley (Jung-en Woo, 1991, p.103). On September 30, 1965, the rate on time deposits was doubled from 15 to 30 percent, and the lending rate was increased from 15 to 26 percent. Such asteep rise in interest rates shocked the business community that had grown accustomed to very low rates.

The interest rate reform had two purposes. The first was to encourage savings in banks and other financial institutions. The higher rate was expected to attract financial resources from the curb market, which offered an interest rate of over 50 percent, to the regulated market. The second was to enhance the efficiency of resource allocation. The higher rate would raise the opportunity costs of capital and prevent wasteful investment.

Indeed, time deposits at banks increased by half by December, and doubled each year afterwards. Time deposits as aproportion to GDP rose from 2 percent to 21 percent between 1964 and 1969, and total deposits from 6 percent to 29 percent. The reform, however, entailed unintended consequences. Banks incurred losses because the lending rate was below the deposit rate, and the BOK had to subsidize them by paying interest on reserve requirements. More serious were the increase in foreign borrowing induced by the large gap between domestic and foreign interest rates and aresulting increase in corporate insolvency.

Entering the 1970s, output growth slowed due to the recession in major trading partner countries and the stabilization program adopted after IMF recommendations. At the same time, repayment of foreign loans began in full, and imposed serious burdens on indebted firms. The large devaluation of 1971, part of the stabilization program, added to the burden. Many firms turned to the curb market to tide over the difficulties (Chung-yum Kim, 2006, pp.313-314).

The business community demanded government action to alleviate their financial burden. In 1972, the government responded with a fifth and sixth interest rate cut (in January and August, respectively) and the August 3rd Measure. 1) 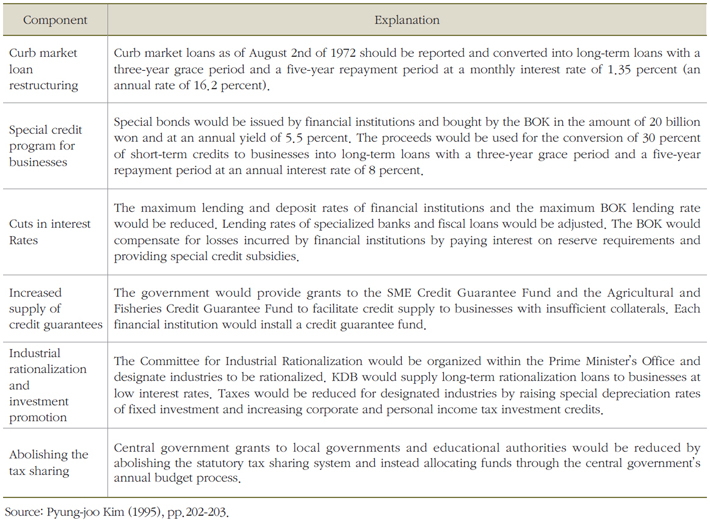 The Measure aimed at relieving enterprises from the burden of curb market loans and providing special financial support. All curb market lenders and borrowers were required to report all their loans held as of August 2nd to tax offices or banks between August 3rd and 9th. Borrowers were exempted from repaying unreported loans. Reported loans were converted into long-term loans with athree-year grace period and a five-year repayment period. The interest rate was set at 1.35 percent per month (16.2 percent per year), which was far below the curb market rate of 3.5 percent per month (42.0 percent per year). The reported aggregate amount of loans was equivalent to roughly 90 percent of M1. Table 2-5 summarizes the main components of the August 3rd Measure.

The effect of the August 3rd Measure, if any, was short-lived. After abrief contraction, the curb market grew again and generated another crisis in the money market in the 1980s. In fact, the existence of the curb market is inevitable under interest rate controls and directed credits. The size of curb market depends on (1) the level of regulated interest rates, (2) the size of funding demand, and (3) the efficiency of financial intermediation.

First, the lower the regulated interest rate is, the larger is the curb market. Those who hope to reap a higher rate of return will supply their savings to the curb market. Official interest rates remained at very low levels from the 1950s to the early 1990s (Figure 2-9). The real rate on export credits averaged -10 percent in the 1960s and 1970s, and the real NIF lending rate was negative in 1974-1981. The general lending rate was also very low.

Second, the larger the credit demand is, the larger is the curb market. The high debt-to-equity ratio of 300-400 percent after the 1970s indicates that credit demand was very large. One reason can be found in the frequent interventions by the government to restructure private businesses. The first instance was the restructuring done by the Taskforce to Restructure Insolvent Firms that began its work in May 1969 on 30 firms with foreign debts and 56 firms managed by banks. The Taskforce finalized are structuring plan in August 1969. The plan aimed (1) to save all banks that had provided loans or guarantees to insolvent firms, (2) to clean up the balance sheets of firms burdened with foreign debt, and (3) to force owners of insolvent firms to sell their personal property (Chung-yum Kim, 2006, p.308). Similar interventions were tried again and again in the 1970s and 1980s,2) and strengthened the expectation that the government would always come to the rescue when times got tough for businesses. This expectation was dispelled only after the economic crisis of 1997 as the sudden fall of the debt-to-equity ratio indicates (Figure 2-7).

Third, the more inefficient the financial intermediation is, the larger is the curb market. If credits are directed by the government mostly toward unprofitable investments, then those investments excluded from directed credits, but sufficiently profitable, would seek funding in the curb market. 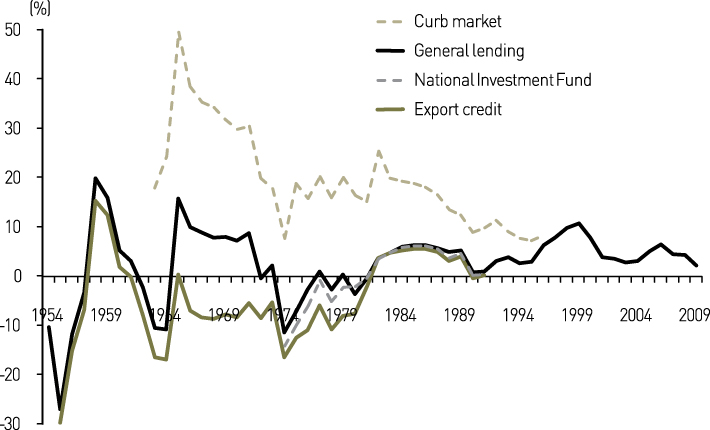 The August 3rd Measure was a failed attempt by the government to put under its control not only foreign borrowing and the organized financial markets, but also the unorganized ones. A better way to eradicate the curb market would have been (1) assuring positive real returns in organized markets by liberalizing interest rates and stabilizing price inflation, (2) denouncing implicit guarantees to private businesses, and (3) discontinuing directed credits. 3) These were tantamount to giving up financial repression.

1) Its full name was the President’s Emergency Decree on Economic Stability and Growth.
2) Examples are the August 3rd Measure of 1972, the HCI investment coordination in 1979 and 1980, and the industrial rationalization in the mid-1980s. The latter two incidences will be explained below.
3) As can be inferred from the convergence of general lending rates and curb market rates in Figure 2-9, the curb market disappeared gradually in the 1990s precisely for these reasons (especially (1) and (3)).