History of Korea’s ODA and KOICA

The Korea’s ODA programs started in the 1960s when the government began training programs with funds from USAID. Through these programs, the Korean government invited citizens of developing countries to Korea and provided them with training, thereby developing the human resources and boosting capacity building in their home countries. In 1965, the Korean government ceased using USAID funds and began paying for these projects with Korea’s own budget. Since then, Korea has focused on technical cooperation programs by continuing to host training programs and by dispatching experts and medical staff to its partner countries.

Korea’s ODA in the 1970s was primarily influenced by the political competition between South and North Korea. During the Cold War era, aid was strategically given to form political alliances to ensure South Korea’s dominant position over North Korea. In the 1980s, however, ODA projects changed direction and focused on economic development. Korea was planning for the eventual overseas expansion of its domestic companies and creating a foundation for future business in exports. Many projects were launched to further this goal in 1982; the Korea Development Institution (KDI) undertook an education project to share Korea’s experience in economic development, the Ministry of Construction initiated grant aid projects on construction techniques, and the Ministry of Labor initiated projects to establish and manage job training centers.

During the 1980s, Korea’s ODA programs were conducted separately by individual ministries. Due to the increasing number of projects, consolidation was necessary to coordinate projects and make aid more effective. In 1987, the Economic Development Cooperation Fund (EDCF) was established to support concessionary loans to developing countries through Korea’s Export-Import Bank. In 1991, KOICA was established to take charge of all grant ODA projects, thereby organizing today’s ODA implementation system.

After becoming a member of the OECD in the 1990s, Korea’s ODA efforts increased as the international status of the country rose. KOICA integrated many projects which had previously been scattered throughout different government agencies. Furthermore, KOICA organized its administrative system by working with private aid organizations and the newly established International Cooperation Center (ICC). Also during the 1990s, Korea forged partnerships with the World Bank and the ADB and became a member of the Inter-American Development Bank to set up multilateral assistance.

In 2007, the Korean government created a team to manage the country’s preparation for entering the OECD/DAC. In November 2009, the admission was confirmed and Korea began its activity as an official member state in 2010. In January 2010, the Korean government passed the Framework Act on International Development Cooperation, a comprehensive law on ODA. This legislation more clearly articulated ODA goals and basic norms, specified an actual system to combat ODA implementation inefficiencies and fragmentation, and presented a consistent ODA policy.

The size of Korea’s ODA increased dramatically from 60 million USD in 1990 to 810 million USD in 2009. This growth temporarily decreased after the financial crises in 1997. However, ODA increased substantially in the 2000s and totaled 750 million USD by 2005. Korea’s ratio of ODA/GNI－a standard quantitative indicator of ODA－was only 0.04~0.07% in 1997, well below the average of other DAC member countries. Korea managed to increase this ratio to a historical 0.1% in 2005 and again in 2009. 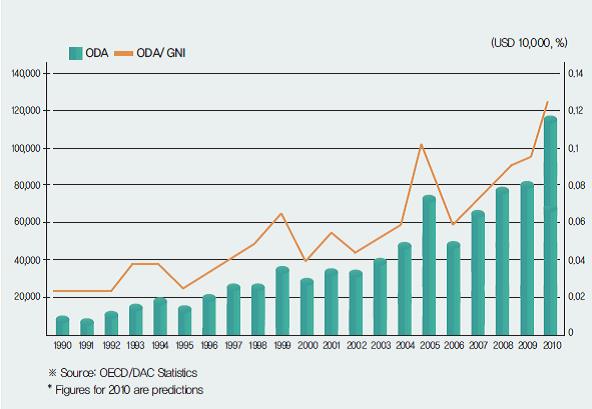 (2) Distribution of Bilateral ODA by Region and Sector From 1990 to 2009, 63.6% of Korea’s bilateral ODA was allocated to the Asian region, and 13% was given to African nations, making the African region Korea’s second largest regional recipient. Latin America came next, receiving 7.8% of Korea’s bilateral ODA, followed by Europe at 3.9%, and Oceania at 0.8%. In the last 20 years, the country to receive the largest amount of aid was Iraq, followed by Vietnam and Indonesia. The Korean government delivered a meager 630,000 USD of assistance to Iraq from 1990 to 2002, but this figure greatly increased after the war in 2003 as Korea assisted with postwar reconstruction and peace building. From 1990 to 2009, fourteen of Korea’s top twenty aid recipients were Asian countries; only six aid recipient countries, including Angola and Ghana, were in other regions. 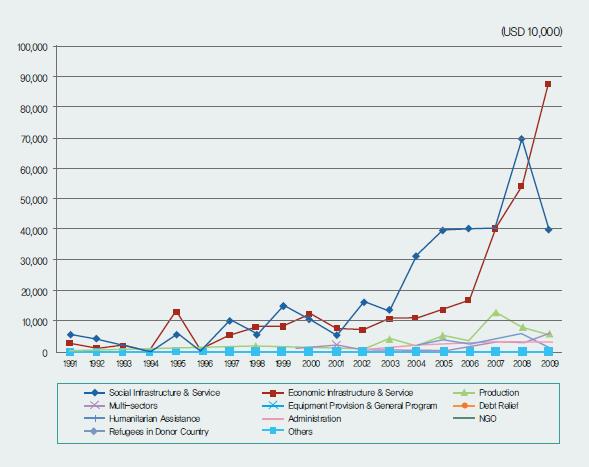 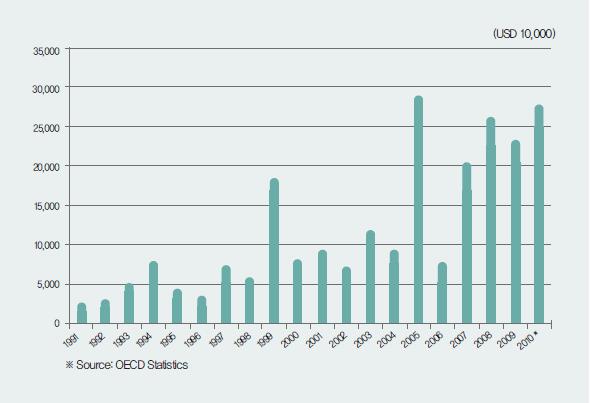 A. Grant and Loan Aid by Type
Korea’s ODA implementation system includes bilateral and multilateral assistance. Bilateral assistance is divided into grants and loans. KOICA administers grants and technical cooperation programs through the Ministry of Foreign Affairs and Trade (MOFAT). Loans are managed by the EDCF, which is run by the Export-Import Bank of Korea (Korea EXIM Bank) under the supervision of the Ministry of Strategy and Finance.

B. ODA Management System
Korea’s ODA has been absent an overall central institution. MOFAT and MOSF have managed the dual system of grants and loans as described in the previous chapter, and several different government ministries have conducted ODA projects separately. To solve aid fragmentation and foster policy coordination between agencies, the International Development Cooperation Committee (IDCC) was established in 2006.

Since the enactment of the Framework Act on International Development Cooperation in 2010, the IDCC has been playing a key role in upgrading Korea’s ODA implementation system. Led by the Prime Minister’s Office, the IDCC suggests consolidated aid strategies and guidelines to promote consistency and unity in ODA policies. Such coordination strengthens the relationships between different government agencies and between ODA projects. Various plans to better implement ODA policies were discussed during the 7th (Oct 2010) and 8th (Dec 2010) meetings. Other specific issues addressed in these meetings were mid-term and long-term goals and implementation plans, ODA volume and the ratio of grants to loans, and ODA advancement strategies. 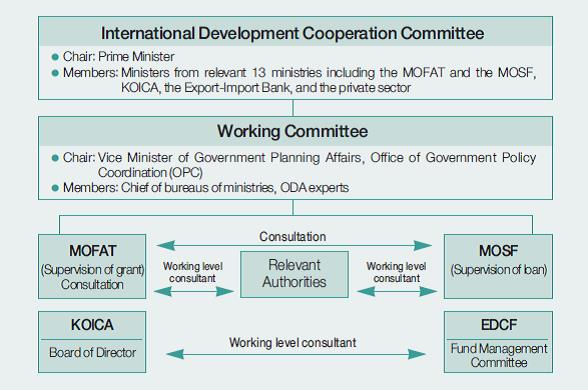 C. KOICA’s Role and Status
KOICA has administered 46.93% of Korea’s total bilateral ODA budget and 78.93% of bilateral grants over the last 20 years, positioning KOICA as Korea’s leading agency for grant ODA implementation. KOICA’s budget has continually grown to reflect Korea’s efforts to assume the position of a significant donor country in the international community. It increased from 23 million USD in 1991 to 30 million USD in 1993, and again to 56 million USD in 1997. During the Asian Financial Crisis in 1998, the budget dropped to 38 million USD, but in 2002, the budget bounced back to reach a new high of 59 million USD. In 2003, the budget more than doubled as an impressive total of 123 million USD was spent on special reconstruction programs in Iraq and Afghanistan. The budget was maintained at around 270 million USD in 2007, and then in 2010, the budget expanded to 454 million USD, an increase of 64.6% since the previous year’s 276 million USD. The budget is expected to continue to grow as the government strives to raise its ODA volume to the average level of other OECD/DAC member countries.
KOICA has been accumulating experience with various ODA modalities. It has assembled a number of regional experts to establish the Country Partnership Strategy (CPS) as well as sectoral experts on education, public health, construction, environment, and climate change. Currently, KOICA’s 44 overseas offices are implementing field based strategies that position KOICA as the sole agency specializing in field oriented ODA projects in Korea.
KOICA has established a feedback mechanism through which it can use lessons learned in the field in CPS and sectoral strategy modification. This feedback system will also allow KOICA to pass on ODA strategies and program know-how to other ODA agencies in Korea. Various educational programs are offered through the ODA Education Center to raise awareness of ODA among Korean citizens. KOICA also supports educational programs on international affairs in elementary, middle, and high schools, and in universities. These educational programs promote pride in Korea’s ODA programs and to circulate knowledge of KOICA’s experiences to the general public.