Foreign direct investment in Korea was allowed in 1962. However, the Korean government depended on foreign loans rather than FDI in its development strategies, with FDI being restricted until the early 1980s. The Korean government worried that foreign firms might dominate domestic industry, while funding through foreign loans was easier to control than capital inflows.

During the early 1980s, when foreign debt became a serious problem among developing countries, the Korean government changed its policy by reducing its dependency on foreign loans and encouraging FDI, with systems to achieve this goal being put in place. In July 1984, the Korean government changed its FDI policy from apositive list system to negative list one in order to expand the number of business categories that would be liberalized for FDI. It lifted the horizontal restriction in foreign equity ceiling of 50 percent.

In 1992, it introduced a notification system in principle. In 1996, with Korea joining the OECD, the government took further liberalization steps on FDI. It started to open up the service sector, including financial, telecommunications and distribution services. In February 1997, the government eased rules on mergers and acquisitions (M&As) of domestic companies by foreign firms, allowing friendly M&As, where the board of directors of targeted firms approved the deal.

In 1998, with the Korean economy trying to recover from the Asian financial crisis, the government promoted FDI by enacting the Foreign Investment Promotion Act. The government allowed hostile M&As as well and liberalized the acquisition of real estate by foreigners. Investment incentives involving tax exemptions were extended to ten years and their coverage was expanded to include high technology industries, industrial support services and businesses located in foreign investment zones. In April 1998, the Korea Investment Service Center (KISC) was established under the KOTRA to provide one-stop services to potential foreign investors. The KISC was renamed Invest Korea in 2003 after expanding the organization and staff. In 1999, an Ombudsman system was introduced in order to address any complaints by foreign investors.

In 2003, three free economic zones (FEZs) were designated in Incheon, Busan/Jinhae and Gwangyang Bay. In these FEZs, various statutes were deregulated to meet international standards and support was provided to improve business management and living conditions. In April 2008, three more FEZs were designated in Hwanghae, Saemangeum-Kunsan and Daegu-Gyeungbuk.

However, the FDI record is seen as disappointing by global standards. According to UNCTAD, Korea is classified in the list of countries where FDI performance falls below its potential. The FDI environment is evaluated as being less competitive than other countries.

According to IMD, Korea ranks 53rd and 54th among 55 countries in terms of deregulation and labor market flexibility, respectively. The transparency of its policy also ranks poorly, at 35th. The U.S. is the largest foreign investor in Korea, followed by Japan and the Netherlands, as shown in Table 4-7. 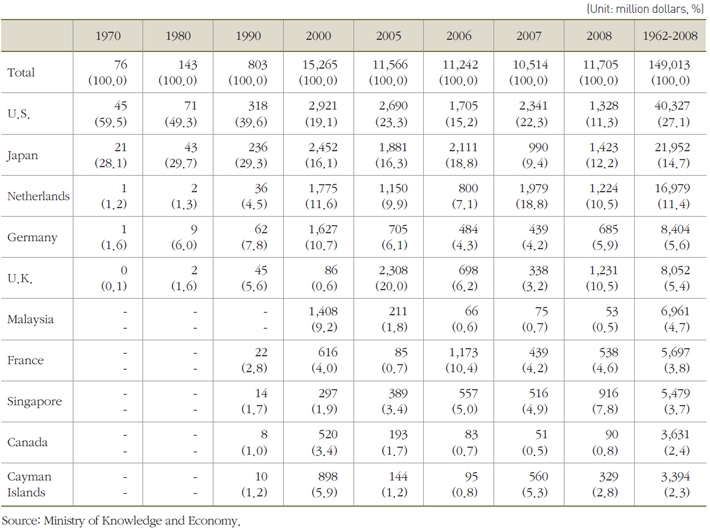 FDI also increased production. From 1999 to 2006, the percentage of output by foreign-invested companies out of total output rose from 8 percent to 13 percent in manufacturing (Table 4-8) and from 4 percent to 10 percent in services (Table 4-9).