Capital account opening was also pursued. In so far as its goal was to encourage foreign capital inflow to fill the gap in domestic savings, however, liberalization remained selective and partial. In January 1960, the Foreign Capital Inflow Inducement Act was enacted but did not succeed in attracting much inflow. In July 1962, the new administration introduced the Foreign Borrowing Repayment Guarantee Act to provide guarantees not only to public but also private borrowing. These two laws were merged into the Foreign Capital Inflow Act in August 1966 (Pyung-joo Kim 1995, p.199). At the same time, the government agreed with Japan to normalize their diplomatic relationship in return for reparation payments of 500 million dollars1) and commercial loans of 300 million dollars (Jung-en Woo, 1991, pp.85-87).

All these efforts led to the heady growth of foreign borrowing. Access to state guarantees was considered a privilege, and all private enterprises wanted to get a share regardless of the viability of their business plans. The large gap between domestic and foreign interest rates due to the interest rate reform in 1965 also encouraged foreign borrowing. Figure 2-6 shows that the outstanding stock of external liabilities, rising from 4 percent of GDP in 1962, hovered at around 40 percent in the 1970s, and rose further to 50-60percent in the early 1980s. This ratio went down to close to 20 percent only after the current account experienced large surpluses in the latter half of the 1980s due to the “three lows.”2) 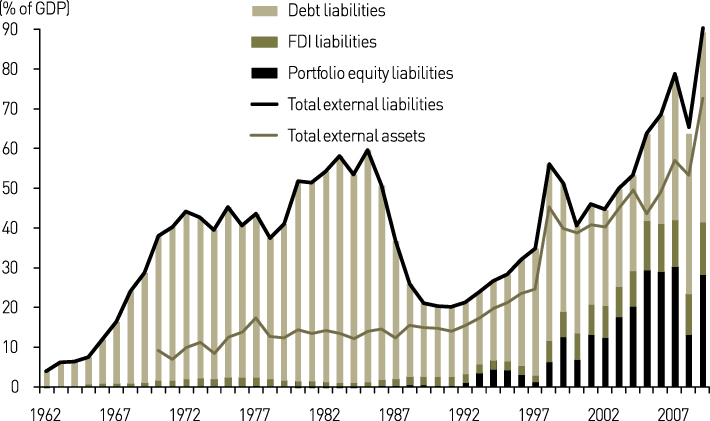 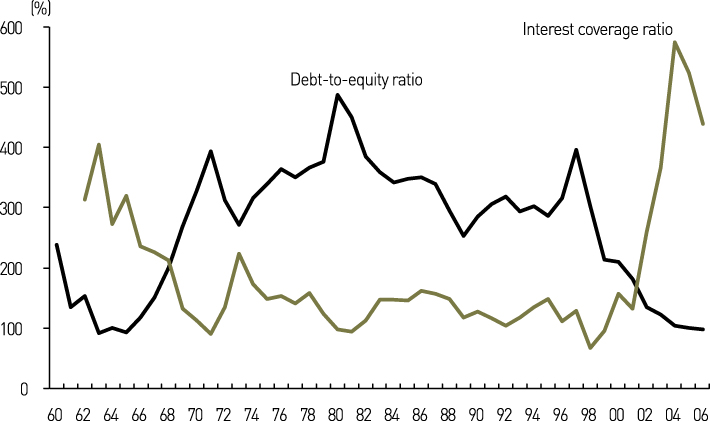 Toward the end of the 1960s, many enterprises were no longer able to repay foreign loans. Banks, which were in charge of providing guarantees on foreign borrowing, also met difficulties (Jin-hyeon Kim, 1986, p.600; Eun-bok Lee, 1986, p.783). In response, the government began to strengthen qualitative and quantitative restrictions on borrowing and paid greater attention to attracting foreign direct investment (FDI). It launched aprogram to attract FDI, designated the Masan Free Export Zone in 1970, and enacted aspecial law prohibiting labor unions in foreign companies (Ki-jun Lee, 1986, pp.792-793; In-hwan Noh, 1986, p.567). FDI inflows, however, remained meager (Figure 2-8). It was not only because Korea was not a very attractive place for multinational corporations, but also because there were still many restrictions on FDI inflows. Restrictions were also placed on capital outflows as reflected in the low level of external assets in Figure 2-6. Full-fledged market opening for both inflows and outflows came only after the economic crisis of 1997. 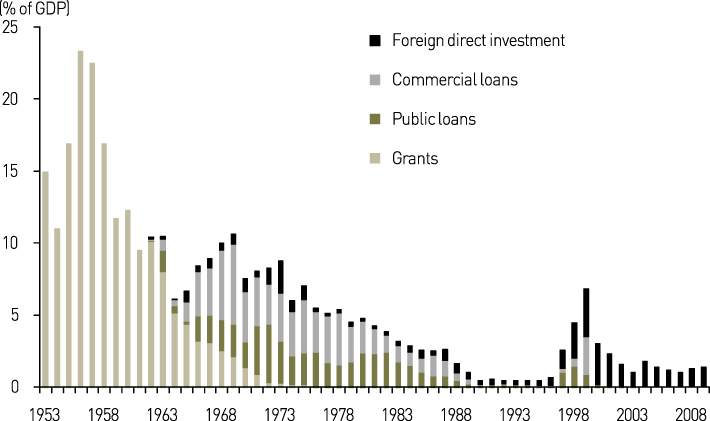 Since the late 1960s, widespread insolvency in the corporate sector had been a recurrent problem. It left banks with piles of non-performing loans and threatened the stability of the whole financial system. The government intervened frequently to stabilize the market, but never tried to redress the root cause of the problem (i.e., excessive debt financing). In fact, government interventions, by propping up ailing firms with public money and other emergency measures, heightened the expectation that the government would always offer a helping hand in times of difficulty, which encouraged further borrowing. This will be discussed below in detail.

1) Reparation was for the Japanese colonial occupation, and the payments comprised 300 million dollars in grants and 200 million dollars in government loans
2) The outstanding stock of debt liabilities corresponded to about 25 percent of M2 stock (and similarly of the bank lending stock) in 1962, rose to about 150 percent in the 1970s, and then went back to 20-30 percent after the three-low period.