HOMEnext Development Overviewnext all
Bookmark Print
The adverse effects of the government-led economic growth strategy that had been pursued continuously since the 1960s, became apparent in the late 1970s. Amid the concerns that high inflation and over-investments in heavy and chemical industries might weaken the international competitiveness of Korean industries, the second oil crisis in the late 1970s had a negative effect on the Korean economy. The economic condition for Korea substantially deteriorated in the late 1970s and the early 1980s. The inflation rate skyrocketed and the growth rate became much lower [Figure 1-1], [Figure 1-2]. 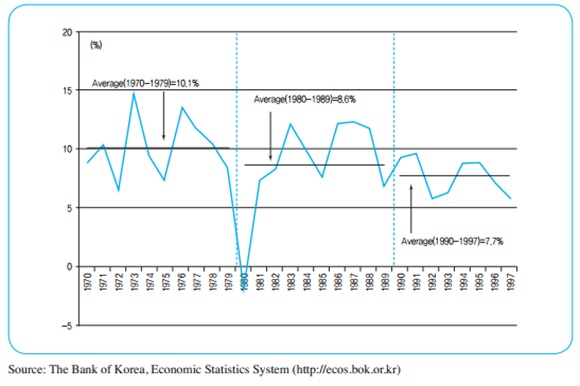 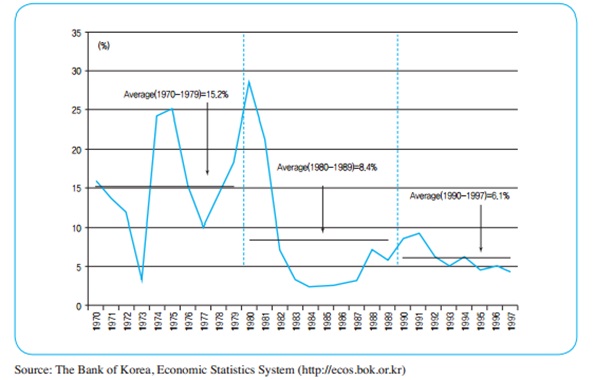 The Korean government concluded that the crisis Korea faced in the late 1970s was not a temporary one, and was mainly due to the structural problems which were the side effects of the government-led economic growth strategy adopted in the 1960s and 1970s. Thus, the Korean government tried to switch its growth strategy from a government-led one to a market-led one. The first move in the switch of the strategies was the announcement of “Comprehensive Policy Measures of Economic Stabilization” by the Korean government in April 1979. The policy measures included the reduction of the export support, the adjustment of investment in heavy and chemical industries, and the reduction of investments in rural housing improvement projects. Also, the Korean government announced that it would rely on market forces to implement those policies rather than administrative powers.

The comprehensive policy measures were reflected in the 5th five-year economic and social development plan, which began in 1982. The goal of the plan was to achieve optimal economic growth under the basic principles of stability, efficiency, and balance. Concrete policy measures to achieve the goal were specified as follows: First, in order to achieve economic stability, price stability was the first and foremost priority. The Korean government targeted for consumer price inflation of a single digit. Second, in order to improve the efficiency of the economy, the Korean government switched its growth strategy from a government-led one to a market-led one. Third, in order to promote balanced growth across various group of people, sectors and regions. The Korean government tried to nurture the small and medium enterprises which produced intermediate parts to develop regional industrial complex and to expand the social security to more people. As a result of these polices, with the help of the stabilization of oil prices, the inflation has been settled down to a one-digit rate since 1982 [Figure 3-2].

Since the middle of 1980s, against the backdrop of the weak dollar, low oil price, and low international interest rates, the export of Korea increased dramatically [Figure 1-3] and the economic growth rate of Korea returned to a high level. In particular, the current account which had been in chronic deficit recorded a surplus in the late 1980s. As the current account turned from deficit to surplus and domestic savings rate surpassed investment rate in the late 1980s, foreign debt began to decrease in 1986 [Figure 1-4]. 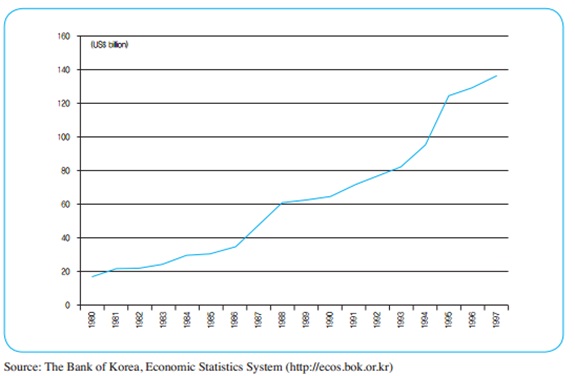 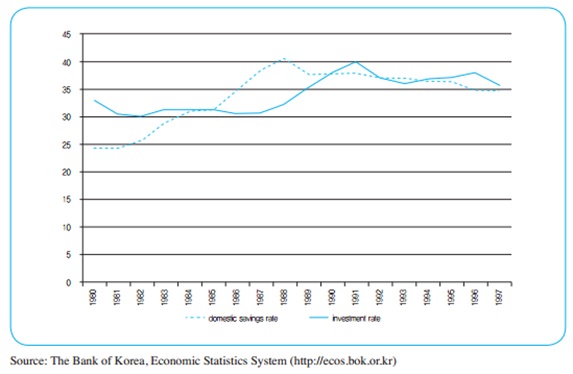