From the early years, the Korean government has highlighted balanced regional development as one of its major policy goals. The government has taken two approaches to achieve this. One is curbing the concentration of population and economic activities in the capital region. The other is promoting equal opportunities in terms of income, jobs and education for all regions. These two approaches are not necessarily compatible with each other. For instance, moving government offices and other public agencies from the capital region to Chungcheong will contribute to reducing the concentration of activities in the capital region, but may widen the gap between Chungcheong and, say, Jeolla. Indeed, the growth of GRDP and per capita GRDP since 1985 have been faster in Chungcheong than in Jeolla (Table 5-10). 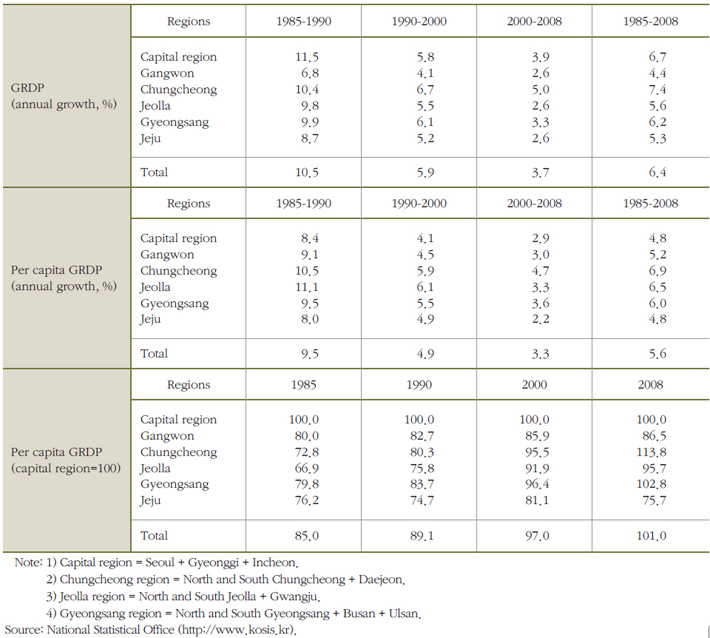 The population concentration in Seoul drew increasing attention from policymakers in the 1960s. The Park Chung-hee administration tried to curb population growth in the capital region partly for military and national security reasons. In the 1970s, laws, plans and policy measures for population control in the capital region were systematized, including those proposed by the presidential office in 1972, the Economic Planning Board in 1973, and the Seoul City Government in 1975. Measures included the designation of greenbelts to prevent Seoul’s urban expansion; the imposition of taxes; restrictions on the number of universities and students in the capital region; the relocation of government institutions to the provinces; and the transfer of power from the central government to local governments.

Targets were set to contain the population to under 6.3 million in Seoul and 11.0 million in the capital region by 1981, when the First Comprehensive Territorial Development Plan would be completed. The actual population numbers exceeded the targets, with Seoul’s population reaching 8.7 million in 1981 and that of the capital region 14.8 million (Table 5-11). The failure can be attributed to an excessively ambitious plan that was not backed by sufficient means to enforce it.

The Second Comprehensive Territorial Development Plan (1982-1991) introduced the concept of “regional life zones” and promoted “regional growth centers” as part of the push for decentralization. The plan divided the entire country into 28 life zones, of which five were metropolitan life zones, seventeen were urban life zones and six were rural life zones. The Plan also designated 15 cities as growth centers to lead the development of adjacent backward areas. Among them, Daejeon, Gwangju and Daegu were selected as the primary growth centers able to absorb the population moving to Seoul and Busan and thus play a critical role comparable to that of Seoul. Twelve regional cities, which served as provincial capitals or business centers with high growth potential, were selected as secondary growth centers.

The population in the primary growth centers grew by 3.0 percent between 1980 and 1990 and that for the secondary growth centers by 1.5 percent, far short of the target of 4.8 percent and 4.4 percent, respectively. The higher population growth rates in the primary centers compared to that for the secondary centers confirm that a policy to promote the development of small regional cities may not be effective in reversing the population concentration in the capital region and encouraging balanced regional development.

Another attempt to discourage the migration from rural areas was made with the“rural settlement area development program,” which would focus on the comprehensive development of entire rural areas, including farm villages and towns. The program, however, hardly prevented adecrease in rural population nor improved the income or living standards of rural households.

Starting in 1986, rural industrial parks were created across the country to support projects designed to help rural households earn extra income from jobs other than farming. The establishment of the parks reached apeak between 1987 and 1990, but started declining afterwards. During and after the 1997 financial crisis, many businesses in the rural industrial parks were closed and the parks were criticized as acting as temporary shelters for marginal businesses.

The interest in balanced regional development declined in the 1990s as government policies for the development of the capital region and other areas focused on measures to increase the nation’s economic competitiveness in response to globalization. The stance was reversed again in the 2000s by the Roh Moo-hyun administration, which pushed ahead with balanced regional development with such measures as the relocation of government and public institutions outside the capital region. The Roh’s administration also strengthened regulations to curb the expansion of the capital region. But in the face of intensifying global competition between firms, it had to bow to demands for deregulation in some cases, approving the construction of LG Phillips Factory in Paju, near Seoul (2003); relaxing the restrictions on the construction of new factories or expansion of existing factories for 14 types of high-tech businesses located within“growth management zones” (2004); giving approval to the chaebol for the construction or expansion of facilities for eight types of high-tech businesses (2005); expanding development areas in“nature conservation zones” (2006); and approving the expansion of factories for businesses engaged in three sectors in the capital region (2007).

In short, government efforts to date to check the growth of the capital region or to promote regional development have not been very successful. They also lacked consistency over time. For example, regulations governing business categories allowed to operate in the capital region have been eased, particularly for high-tech companies. 1) Such ad hoc deregulation, however, has led to unorganized territorial development and damaged the environment. Some claim that policies on the capital region need afundamental reorientation to better protect the environment on the one hand and to properly accommodate economic realities on the other (Jung Jay Joh, 2002; Yong-woong Kim and Mi-sook Cha 2009). In particular, attention should be given to the increasingly important role of big cities in the era of globalization and knowledge-based economies (Gill and Kharas, 2007).

It is also suggested that development policies for the areas outside the capital region be reformulated. Under the current economic structure, which depends on the service sector or 70 percent of its production and 60 percent of its employment, it is unrealistic to expect that alarge-scale physical investment to promote the manufacturing sector in non-capital areas would generate economic growth there. Rather, the emphasis needs to be placed on fostering the service sector in major regional cities and building“soft” infrastructure, i.e., the capability of regional communities to adapt and innovate themselves (Jong-il Kim, 2008; Youngsun Koh, 2008).

1)Similar changes have been observed in France and other European countries (Ancien, 2005; Bachtler and Yuill, 2001; de la Fuente and Vives, 1995).
2) See Chapter 3 for a discussion on the role of resource reallocation in Korea’s economic growth.