The country posted record growth under the Five-Year Plans, but economic development, which centered on industrialization, deepened the gap between urban and rural areas. Many people left the rural areas to start new lives in the cities. The growing discontent of the farmers became a political issue for the government. Unemployment and poverty emerged as social issues. The farming sector was faced with a labor shortage, which caused arise in agricultural production costs and threatened the future of the sector.

It was necessary to improve the income of farm households and encourage people to remain in rural areas by offering more employment opportunities. These challenges required drastic measures to reverse the problems caused by unbalanced growth resulting from rapid industrialization. The Saemaul Movement was thus started with the aim to improve rural living conditions in such areas as roads, housing, water supply, sewage and irrigation.

These government efforts included developing new varieties of rice as part of the Green Revolution and carrying out large-scale reclamation projects to create farmland. The Saemaul Movement, which also served as a national morale-boosting movement, sought to reinvigorate the country. It stressed the principles of self-help, self-reliance and cooperation and the movement was later adopted by factories in urban areas.

The Saemaul Movement was launched in 1971 with the aim of increasing the income of the rural population by expanding various forms of economic activity. In the beginning, the Ministry of Internal Affairs played aleading role in the movement, providing cement supplies, for example, through the local administrative network. More ministries later became involved in carrying out Movement-related programs, such as helping rural households find alternative sources of work in the off-season, forming cooperatives for the production of rice and barley, supplying electricity to rural areas, and building factories.

Central and local organizations, now known as the National Council of the Saemaul Movement in Korea, were established to coordinate Saemaul activities carried out by the ministries. The Saemaul Movement had three early objectives in promoting the modernization of rural areas, which was summed up in the “three liberations”: liberation from jigae, the A-shaped back-pack frame used to carry heavy loads (meaning improvements in farming tools and transport); liberation from candlelight (meaning power supplies); and liberation from chogajip, or straw-roofed houses (meaning improvements in living conditions). Soon, the movement came to tap the community spirit among rural villagers to promote development practices in various areas, including dairy farming, fishing and local processing industries, in addition to farming.

For a time in the 1980s, farm household incomes were higher than those for urban households, but the situation soon reversed again. There were increasing calls that a new development strategy should be adopted to extend beyond the limits of an agriculture-centered, village-level rural development program. It was agreed that the development program should be carried out on a more comprehensive level to embrace all phases of daily life, while bringing rural centers and outlying districts closer together. In 1982, the Ministry of Internal Affairs adopted anew policy concept called Rural Settlement Area Development to promote comprehensive development projects. Five urban and rural districts (si and gun) were selected as a pilot project in 1985. The development plan, however, was found to require too large a budget and thus it was replaced by township (myeon) rural settlement area development projects under the Rural Area Rehabilitation Act. 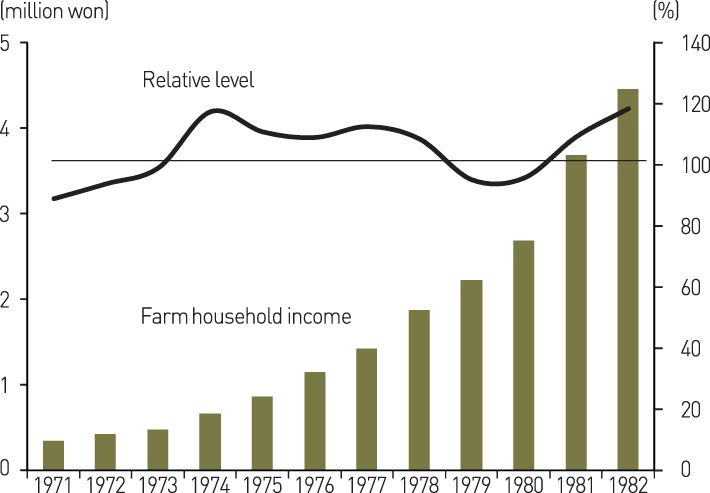 The industrial parks development boom in the 1980s created rural industrial parks whose main purpose was to help rural households gain income from sources other than farming. Previously, there were programs to create sideline jobs for farm households, such as building Saemaul-related facilities. But they had many problems since they were carried out in an uncoordinated manner and were not closely linked with the existing infrastructure. In response, the government established small- and medium-sized industrial parks in rural areas, offering various incentives, such as offering land at cheap prices, tax and financial benefits, and streamlining approval procedures to attract businesses.

Reforestation efforts were made into a national campaign and all relevant administrative units were mobilized as in the Saemaul Movement. Back in the 1940s and 1950s, wood was used as the main household fuel and that was the biggest factor causing deforestation. The problems associated with the destruction of forests would not be solved until the 1960s when fossil fuels gradually replaced wood. Forest acreage started to expand and the number of trees in the mountains increased rapidly from 1973, reversing a decline that had started in 1927. Slash-and-burn farming was stopped as the government offered financial incentives to find alternative ways of making a living. Continuing demand for wood could be met with imports, thanks to the liberalization of the international timber trade. In this respect, it can be said the nation’s economic development basically stopped the devastation of forests. Lester R. Brown, the founder and president of the Earth Policy Institute in the U.S. said, “South Korea is in many ways a reforestation model for the rest of the world (Brown, 2006).”