The opening of the expressway linking the capital with the port city of Busan formed the backbone for a development plan in the 1970s based on a Seoul-Southeast corridor.

The creation of the Southeast Coastal Industrial Belt, centered around Busan port, reflected a strategy of developing specific regions for different purposes, taking into account their access to resources and geographical advantages. Such a strategy was in step with the “growth pole theory” and “the core-periphery theory” favored in the 1950s (Myrdal, 1957).

Under the Local Industry Development Act enacted in 1970, the country established a system of providing state support for industrial parks, with 12 cities, including Seoul, establishing local industrial parks in the early 1970s. These parks helped support the growth of SMEs. But there were limits to how much light industry could contribute to the country’s economic development.

As a result, President Park Chung-hee outlined his vision in his New Year press conference in 1973 of developing HCIs as a top economic priority. In February 1973, the government launched the HCI Drive Committee, comprised of the relevant ministers and experts and headed by the prime minister. The HCI Planning Group, headed by the president’s chief economic advisor, was created to serve as a working-level unit to provide support for the Committee. The main function of the Committee was making final decisions on the policies concerning HCIs, including a comprehensive development plan, location and site plans, industry sector promotion plans, and industrial assistance programs.

In February 1974, the government established the Industrial Complex Development Corporation, charged with the construction of the industrial sites. The government invested 100 billion won in capital for the Corporation, which had special privileges, including tax exemptions, the right to appropriate land, and the right to borrow from overseas with the approval of the construction minister.

Following asystemic review of the plan for the HCI drive, the government commenced work on the giant coastal industrial complexes. These complexes, which would be larger than the industrial parks in the country’s interior, were based on the concept they would evolve into new industrial cities.

Three factors governed the creation and operation of the complexes. One was that the complexes would promote economies of scale when it came to the production of iron and steel, oil refining and industries based on non-ferrous metal manufacturing. Second, the complexes would promote the efficient use of natural resources since there were only a limited number of candidate sites able to meet the requirements for port facilities, water, and proximity to nearby cities. Third, the complexes were meant to promote the growth of new industrial cities. Changwon was developed as a completely new city, while Yeocheon was developed as a satellite city close to an industrial park. The small towns of Ulsan and Pohang grew into industrial cities.

Most of the industrial complexes were located along the southeast coast, including Pohang, Ulsan, Onsan, Okpo, Jukdo and Changwon, while afew others were built in the rest of the country, including Yeocheon at Gwangyang Bay on the southern coast and Bukpyeong on the east coast.

These areas had previously been regarded as remote rural areas, but grew rapidly between the mid-1970s and mid-1980s due to the HCI program. During the Chun Doo-hwan administration, POSCO Gwangyang Steelworks and Daebul Industrial Park in Mokpo were added to the Southeast Coastal Industrial Belt. Their inclusion was partly due to political considerations to appease the Jeolla region, which had opposed the Chun administration with an urban uprising in 1980, and partly out of a perceived need to create a counter-magnet to the capital region.

In the case of POSCO, its original steelworks in Pohang had reached full production capacity and it needed to build a new steel plant. Asan Bay and Gwangyang Bay were considered as candidate sites. But it was pointed out that a steelworks in Asan Bay would be close to Seoul and would contribute to the problem of overpopulation in the capital region, while asteelworks in Gwangyang would contribute to the industrialization of Jeolla, which was less developed. After debates among the relevant ministers and interested parties, President Chun decided that Gwangyang Bay would represent the westward extension of the Southeast Coastal Industrial Belt.

Meanwhile, the development of industrial parks in interior urban areas continued as in the 1960s, but they were less important than the coastal industrial complexes in terms of land size, the amount of attention they received by the government, and their participation in the development boom.

The number of interior industrial parks grew to 15, covering a total area of 16.8 km2 in the decade following the Industrial Park Development Promotion Act. But their size was no more than 5 percent of that of the 14 coastal areas, which covered atotal of 315.0 km2.


Table 5-3. Changes in mining and manufacturing employment by region 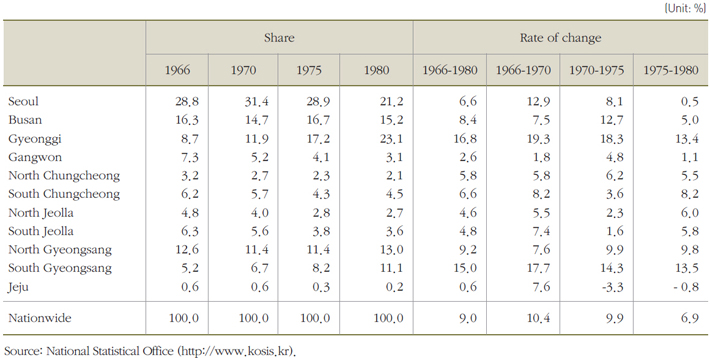