The importance of the foreign exchange rate to an economy, and in particular, to its foreign trade cannot be overstated. If the domestic currency is overvalued, all domestic goods and services would be over-priced in the global market; similarly, if the domestic currency is undervalued, all the goods and services would be under-priced. This subsection first discusses the changes in Korea’s foreign exchange rate policy, focusing on the period from the Korean War to the early 1960s.

“An official rate was set at 0.015 won to one US dollar in October 1945, equivalent to the yen exchange rate in Japan.”1) This was the start of the won-dollar exchange rate. The rate, however, did not play an important role until after the end of Korean War as foreign trade amounted to barter trade until then. In the meantime, an event took place that profoundly affected the exchange rate policy. In July 1950, shortly after the outbreak of the war, a financial agreement was made between the Korean and U.S. governments in relation to the UN forces dispatched to the Korean peninsula. Under the agreement, the Korean government would advance won to the United Nations Command (UNC) for its expenditures in Korea, which would be paid back in dollars.2)

The agreement meant that the higher the value of the won was to the dollar, the greater amount of dollars the Korean government would receive for the won it had advanced. This seemed to dominate all other considerations in the exchange rate policy, which is not surprising since dollar redemption for won advances was the most important source of foreign exchange supply.3) Prior to the agreement, the monetary authority appears to have been concerned about currency overvaluation, but afterwards the exchange rate policy was aimed at keeping won valuation as high as possible. In the short period from August 1948 when the Korean government was established, to July 1950 when the agreement was made, there were four devaluations and a bidding system was introduced. For the next ten years until February 1960, there were only four devaluations. Inevitably this policy led to atug-of-war between the Korean and U.S. governments over the exchange rate, as it was in the U.S. interest to have the won fall in value.

Thus in the 1950s, the official exchange rate always kept the domestic currency overvalued. The extent of overvaluation is shown in Table 4-2 that compares the official rate with the market rate. The market rate came into being as exporters deposited their earnings at the Bank of Korea in dollar-denominated accounts under the Foreign Exchange Deposit System, which was in effect until 1961, and traded the certificates of deposits in the market. 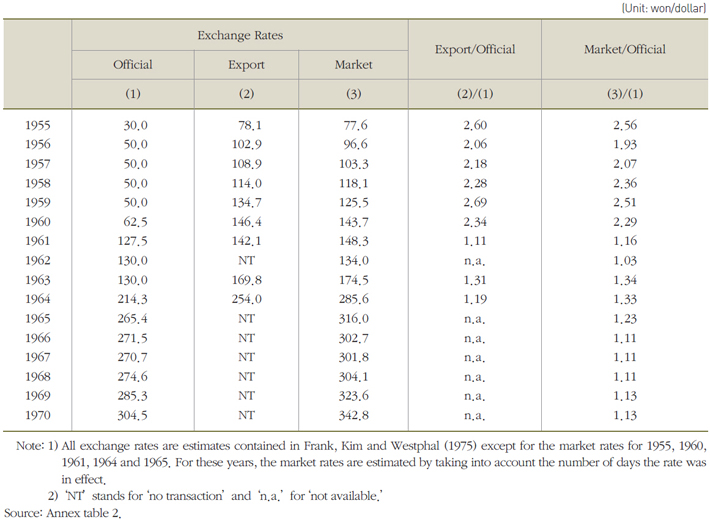 Besides the official rate and the market rate, there were numerous other exchange rates depending on different allocation schemes for dollars that the Korean government obtained through the sale of won to the UNC and exports of tungsten that the government directly handled. The allocation schemes included “special foreign exchange loans,” “bidding,” “lottery” and “modified bidding system” among others.

The import policy began when an import and export licensing system was introduced in 1946, under which the government simply announced the items that could and could not be imported, with no quantitative controls in place. It was replaced by the Import Quota System in 1949, which specified not only the items that could be imported but also the quantity. In 1955, the Trade Program (Import Program) was instituted, a positive-list system that listed “approved import items,” which were divided into “automatically approved items” and “restricted items.” If there was sufficient domestic production of some items to meet domestic demand, then the import of these goods was prohibited. If the domestic production of some products could not fully meet domestic demand, then the import of these goods was either automatically approved or restricted. The Ministry of Commerce and Industry had the discretion to allow imports of the prohibited or restricted items. As is evident, the trade policy was protectionist and was in line with the import-substitution strategy that was in vogue at the time.

Tariffs rose in the 1950s. In 1946, the tariff rate was set at a uniform rate of 10 percent on all goods except those financed by foreign assistance. In 1950, a new law on customs duties raised the average tariff rate to 40 percent to increase tariff revenue and protect domestic industries. The new tariff rates were lower on food, raw materials and essential goods with little domestic production, higher on unfinished goods competing with domestically produced goods and highest on finished goods competing with domestically produced ones. In 1952, the government introduced tariff exemptions on imports of capital equipment required for certain major industries, including electric power, shipbuilding, metal working, machinery, chemicals, oil refining, textiles, mining and fishing. In 1957, individual tariff rates were changed somewhat and the average tariff rate rose by about 4.1 percent. But the tariff structure remained basically unaltered.

In terms of export policy, there were initially export controls to prevent the export of essential domestic products. A few export promotion measures were taken during the 1950s, mostly of the nature of softening the negative effects of the strong currency on exports. One of the earliest promotion measures was the Trade Credit System (later known as the Export Credit System) introduced in 1950, under which exporters enjoyed priority in the allocation of domestic credits. Another early measure was the Preferential Export System, adopted in 1951, under which the exporters of so-called non-essential products enjoyed the right to use a certain percent of foreign exchange earnings for importing popular items, which otherwise could not be imported. From 1950 to 1954, exporters enjoyed preferential access to foreign exchange loans in a scheme that allocated government-held foreign exchange reserves (KFX) to domestic users. In 1955, direct subsidies were provided to the exporters, but the program was discontinued the following year as the government failed to obtain funding for it in the budget. Tariff exemptions were introduced in 1959 on imports of raw materials and intermediate goods for export products, and it was changed into a tariff rebate in 1974. Finally, the trader registration system under the Trade Transaction Act of 1957 encouraged exports requiring that a trader should export a certain minimum amount of goods to be registered as an importer.

1) The exchange rate is expressed in current denomination, taking into consideration two currency reforms: the 100-to-1 revaluation in 1953 and another one of 10-to-1 in 1961 (Frank, Kim and Westphal, 1975, p.28).
2) It was Agreement between the Government of U.S.A. and the Republic of Korea Government Regarding Expenditures by Forces under Command of the Commanding General, Armed Forces of Member States of the United Nations . See Frank, Kim and Westphal (1975), p.28.
3) Foreign exchange from this source amounted to 62 million dollars in 1952 and 122 million dollars in 1953, or about 62 and 70 percent of total foreign exchange receipts respectively in those years (Frank, Kim and Westphal, 1975, p.28).