The successful rise in exports greatly affected export policies.1) In June 1964, the Korean government adopted the Comprehensive Export Promotion Program, which attempted to place export promotion in a comprehensive and consistent framework, since previous promotion measures were piecemeal and improvised in nature. The program extended policy support to export production as well as exports themselves. It may be regarded as much as an industrial policy as a trade policy since it attempted to pick and promote export industries. Credit incentives were greatly expanded by increasing the number of types and volume of loans for exports that offered preferential interest rates.2) Even under the financial reform in 1965 that nearly doubled the bank deposit rate for savers, preferential interest rates for exporters were further reduced.

In 1965, generous “wastage allowances” were introduced, which allowed the exporters to import inputs for their production over and above established needs. Since this was applied to intermediate goods and raw materials, import of which was limited or subject to high duties, the unused portion could be sold in the domestic market for profit. Also in 1965, a system of local letters of credit (L/Cs) was introduced, which exporters could issue to domestic producers of export goods and intermediate inputs on the basis of the export L/Cs they received. The domestic producers with local L/Cs enjoyed the same benefits that exporters did with respect to preferential loans, import licenses, tax favors and so on.

Also in 1965, President Park Chung-hee began to preside over the Monthly Export Promotion Meeting attended by various economic ministers, the Bank of Korea governor, the heads of KOTRA, the Korea International Trade Association (KITA) and the Korea Chamber of Commerce, the chief executives of banks and financial institutions, the chairmen of leading export firms, and trade experts. These changes in policy represented an all-out effort by the government for export promotion.In addition to the export promotion measures already mentioned, various policies and institutions were created for exporters. The export insurance system was introduced in 1969 to compensate exporters, producers and foreign investors for possible losses from credit risks (i.e., the bankruptcy of importers) and political risks (such as wars and foreign currency trade restrictions).

In addition to the founding of KOTRA in 1962, KITA, which was established in 1946 to represent the interests of traders, has played a critical role in pioneering overseas markets, promoting cooperation with partner trade organizations in the private sector, conducting surveys and providing related information. Responding to the need for medium- to long-term credit for exports and imports the Export-Import Bank of Korea was established in 1976, and it has been providing export loans and trade finance, and facilitating economic cooperation with foreign countries.

Import policy was gradually liberalized from the mid-1960s, as the balance of payments improved. The number of items eligible for importation increased substantially thereafter, while the number of prohibited items declined. Korea joined the General Agreement on Tariffs and Trade (GATT) in 1967, and the negative-list Trade Program was adopted in 1967. The import liberalization ratio, the proportion of automatically approved items in total import items, rose from 12 to 60 percent. Korea also began to scale down export promotion measures in the early 1970s. For example, the reduction of income tax on export earnings was abolished in 1972, and the tariff exemption on imports of raw material for export production was changed to a tariff rebate system in 1975. Import policy may be graphically summarized as in Figure 4-3, which shows the average tariff rates and “quantitative restriction” liberalization index, the latter being the ratio of the number of automatically approved items over total importable items. 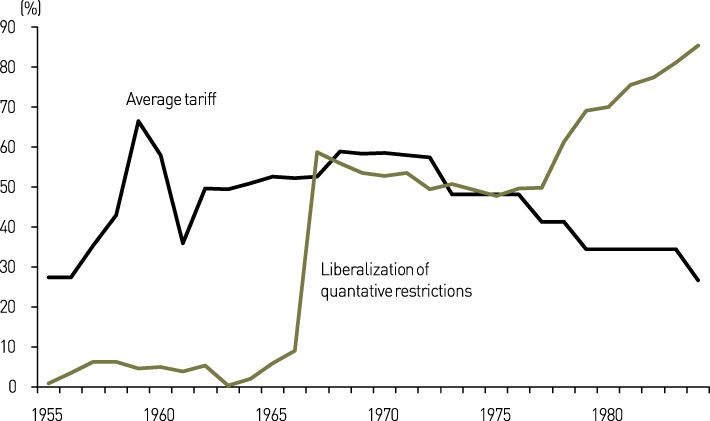 1) In 1963, the government instituted a full-scale export-import link system under which all imports were linked to exports, while removing nearly all goods from the list of automatically approved import items. It was a response to an import surge and the rapid decline in foreign exchange reserves due to expansionary fiscal and monetary policies in the previous two years. The effect is reflected in the premium in 1963 and 1964 in Figure 4-2.
2) See Frank, Kim and Westphal (1975), p.49. The preferential loan arrangements included loans for the suppliers of U.S. offshore procurement (mainly for Vietnam), credits for the importers of raw materials and equipment for export industries, export usance (credits for exporters who ship without L/Cs but receive payment after shipment), export industry promotion loans, Medium Industry Bank equipment loans for the conversion of factories to export production, Medium Industry Bank equipment loans for specialized export industries.