As various wastes were piled up in this site unsanitarily for 15 years, the rotted wastes generated leachate, odor and harmful gas, and thus contaminating the Han river and atmosphere, while deteriorating the surrounding ecology. The goal of the stabilization work was to restore the environment, while keeping the huge garbage heaps as it is. In other words, the goal was to identify source of environmental pollution in the dumping site as it is and to restore the abandoned land of the Nanjido into an environment-friendly park. The stabilization work included installation of the impermeable wall in order to prevent leakage of leachate from dumping site, the treatment of leachate, the collection and treatment of landfill gas, slope stabilization to manage side of waste heaps, and the construction of grassland after covering the top of landfill with soil. A shielding wall was installed to prevent leakage of leachate from sides and bottom part of the dumping site. The leachate were collected and sent to the leachate treatment facility for purification. Sheet pile and slurry walls were installed as measures to prevent leakage of leachate and pollution.

Also, 31 leachate collection wells were installed on the inside of shielding wall to collect the planned amount of leachate (1,860 tons/day). Collected leachate was transported to the leachate treatment facility. In order to remove the foul odors and dangers of explosion due to landfill gas, the upper part of the dumping site was covered with a blocking layer consisting of soil and shielding sheet. The 106 landfill gas collection wells were installed on the upper part and sides of the landfill to extract landfill gas from waste heaps, and collected landfill gas was transferred to the treatment facility through a 14,050m long gas pipe. Landfill gas was used as fuel of regional heating system and remaining gas was incinerated in the gas stack. The upper part of the landfill had a 4% or higher degree slope to ensure rainwater runoff. The upper lot of Landfill 1 and landfill 2 were divided into 10 blocks to help rainwater runoff and site rearrangement was planed accordingly. The upper parts of the landfills were covered with soil to restrict emission of landfill gas and also with a blocking layer (HDPE) to prevent rainwater penetration and underground water pollution by leachate later. On the uppermost part, a vegetation layer (30cm) and surface layer (30cm) was constructed to help vegetation restoration without rainwater permeation. Side-gutter was installed at the slope of landfill to collect and drain of surface water ran off from the upper part. Rainwater pipes (plume pipes, PE pipes, slope waterway, hume pipes, etc) were installed to drain rainwater from the landfill slopes and maintenance roads. 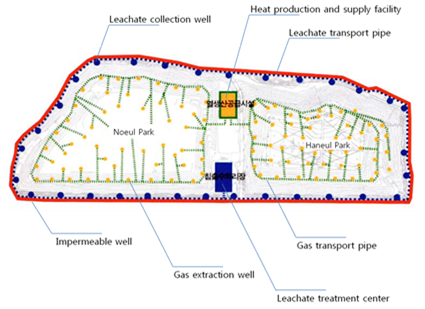 The World Cup Park was designed pursuing 'mutual coexistence and symbiosis', coexistence of 'nature and human culture', construction of a symbiotic relationship of 'environmental conservation and human use', and harmony of 'artificial structures and natural scenery'. The land usage was divided into four districts as the activity district, environmental restoration district, natural ecology district and regional facility district according to the site characteristics. ##3D_LAYER##The Pyeonghwa Park was designed to express the symbolism of the 2002 World Cup commemorative park and to play a key role in connecting all World Cup Parks organically.##3D_TEXT:The design of Pyeonghwa Park referred to Germany's Munich Airport Center, US Costa Mesa Town Center, Germany's Regensburg University, La Villete Park of Paris, and Germany's Gothenburg Gustav Adolf Square.(referring to New Millennium Park Basic Plan)##3D_LAYER_END## ##3D_LAYER##The Nanji Pond was built in the center of the park and connected to Nanjicheon Park##3D_TEXT:The establishment of Nanjicheon Park utilized cases such as the Twin Island salt wetlands restoration of the US, Gase River, Nuka River and Hikizu River of Japan, and the 1998 Expo Site of Lisbon, Portugal.(referring to New Millennium Park Basic Plan)##3D_LAYER_END##  as the source of the Nanjicheon Stream. ##3D_LAYER##The Haneul park##3D_TEXT:Haneul Park was designed referring to Byxbee Park of California, USA, Olympic Park of Sydney, Australia, and Kiyohara Kita Park of Tochigi, Japan.(referring to New Millennium Park Basic Plan)##3D_LAYER_END## was established as a place for education that expresses the rebirth of abandoned land, which in this case is a waste dumping site, back to nature. In order to express the theme of 'restoration of nature', the entire park was made to be covered with grass since grass is the vegetation that appears first in dry and rough land. ##3D_LAYER##The Noeul Park##3D_TEXT:Noeul park, which was originally planned to be built as a public golf course, referred to Harborside Golf Course in Chicago that was built on top of a waste landfill and Wakashu Links of Tokyo Japan for structure and management methods.(referring to New Millennium Park Basic Plan)##3D_LAYER_END## adopted the establishment of an open-spaced environment-friendly golf course that minimizes damages to the natural environment, while being convenient to be used by people. The area of the golf course was limited to 57% of the area of the upper part of Landfill 1, while the remaining 43% was used for natural vegetation area and for exercise and walkway for people. The Nanjicheon Park is a park that restored the natural ecosystem damaged due to Nanjicheon Stream containing leachate from wastes, and thus it was established to show the natural river ecology. The land usage plan and spatial structural plan were established with the goal of creating a space for residents, and especially the disabled, senior citizens and youths, of SangAm New Millennium Town.
##3D_LAYER##The Nanji Han River Park##3D_TEXT:The concept of La Villete Park of France was reflected partially in the Nanji Han River Park.(referring to New Millennium Park Basic Plan)##3D_LAYER_END## is a neighborhood park to be used by residents for recreation and provides exercise, play, picnic and walking trail. ##3D_LAYER##Simultaneously, it was planned out as an environment/ecology, World Cup events, and urban park/neighborhood park to accommodate the functions needed for the World Cup games.##3D_TEXT:In detail information about World Cup Park Establishment is available from “World Cup Park construction white book”(Seoul City Government, 2003). The white book includes history of Nanjido, World Cup Park designs, construction work procedures, park opening  and management, and so on.##3D_LAYER_END##